We all have them; they make us unique, but we also share parts of our uniqueness with our children. A long time ago with very dodgy methodology, Alice’s Daddy and I came to the conclusion that having two ANSD children was our 1:10,000,000 moment. We’d prefer winning the euromillions but hey ho…..

So little Ollie was our defining moment and we decided to actually see if we could answer the final piece of the puzzle. Over 60 genes have been identified (so far) as causing deafness and over 40% of kids with ANSD (most commonly Otoferlin or Pejvakin mutations) have a genetic cause. The numbers increase almost daily, but still a large proportion of clearly genetic conditions haven’t yet been discovered. So in the interests of science and family we wanted to get our genes checked.

To get your genes tested you have to be referred to the genetics consultant in your region. He’s usually friendly and has a caring manner ( think of the number of awful conversations he must have to have). He’s a Jack of all genetics and clearly not a master of deafness, but hopefully he is one page ahead of you in the textbook. Hopefully.

The deaf community needs to help each other, so we blagged the contact details of a lady in France who can. How ridiculous is the system where parents know more than doctors?

Ollie’s blood was taken in October. In December we were told that not enough had been taken (red blood cells contain no DNA, so the vast majority of the blood sample is useless) in April. Alice donated 5ml during her last surgery and since then we have waited.

Last week we were invited in to see the Genetics Consultant and dared to dream of closure……But no…mis-filed forms, lack of family connection between the two Campbell ANSD tests and………wait for it……… Alice’s blood is still sitting in Tooting. So thanks – that’s rubbish, bureaucratic, lack of cohesive thought, rubbish…..thank God Ollie’s surgery wasn’t waiting on it.

But here’s the rub. If the cause of ANSD is genetic (err yes….) you know your child won’t grow out of it; they are stuck with it for life. Implanting at one instead of two becomes appropriate; it saves thousands of pounds in pointless audiology appointments and testing and gets good sound into our children earlier, leading to better implant outcomes.

So come on the NHS: Spend the money, get your proverbial arse in gear and start testing the ‘well ANSD babies’ like Ollie and Alice. While you’re at it, could you deliver a vial to France, otherwise I’m on a day trip…?

In 2008 we started this blog as a means of communicating ours and Alice’s journey through ANSD and into the world of cochlear implants. Along came Ollie and the journey continues.

Our blog, by all accounts, has been presented to parents and professionals from Australia to Jordan and I am moved daily at how many lives Alice has touched. We often meet people at CI gatherings who greet us like long-lost friends or receive emails from folk who feel they know Alice and Ollie so well and for who we have provided some hope.

We are blessed and very lucky with our beautiful and remarkable family. 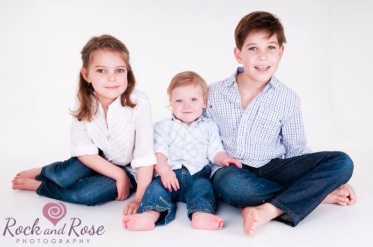 We have had over 50,000 unique visitors to our blog and have between 50 and 100 unique hits per day. We’ve even been on TV!  I wish I had something more meaningful to tell you all. Our journey continues and Alice and Ollie continue to amaze us every day.

I am, however, conscious that our blog has evolved to be one of the main sources of information for people searching on Google for info on ANSD. With that goes a certain responsibility. I remember how helpless we felt when we were told that Alice was in the subset of a subset of a subset. Google turned up very little written by parents for parents. I hope, in some small way, we have changed that.

And this is where you all come in – if you’d like to. I recognise that Alice and Ollie’s story is but one, small example of an ANSD journey. One filled with hope, but one that is as unique as everybody else’s. We have, therefore, thought that it might be a good idea to open up our site to other families who would like to share their story with the world. To families who can offer a different angle on the ANSD journey, warts and all.

In short, would any of you be interested in sharing your story with the world and helping others as, hopefully, we have done? whether this is just a story or an on-going ‘blog’, I really think there is something more we can do to help others.

Drop a note below and we can take it from there…..